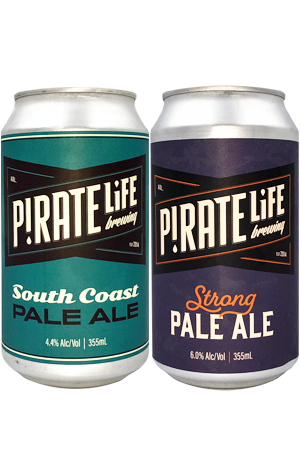 If you've been watching Pirate Life from afar over the past year or so, you might think they'd eased up on the new beers. And, while hyped nationwide can releases have been lesser sighted, one only needs to have visited one of their bars at a festival (remember them?) or called into their imposing Port Adelaide home to know that's far from the case. Each time I've spoken to co-founder Mick Cameron over the past couple of years the number of new releases planned for the coming 12 months has moved only one way: up.

But when you've not got the 20 taps at your home brewery available – not to mention the hundreds of shuttered venues across Australia – what do you do with them? In the case of this pair or pales – and these two sours – you pop them in cans instead. In the case of South Coast Pale, crack one and you'll find a rather different pale to their core range offering: paler and more fleet-footed. A combination of Kiwi hops Wai-iti and Taiheke with new US variety Cashmere keeping things relatively subdued on the nose – subtle citrus and stone fruit – with the real show on the flavour front. There's a sherbet lemon boiled lolly liveliness, sweet pineapple and a grapefruit pith like bitterness that gives this otherwise light-bodied (and core range) refresher a lengthy finish.

The Strong Pale Ale is the new name and look for the beer that started out as the Trans-Pacific Partnership with Ballast Point in 2017. Now back as a seasonal, it retains a blend of hops from either side of the Pacific layered with native finger lime and coriander seeds. In the first release in the new livery, I found pineapple, citrus and berries leading the way with the aroma, with a dark spice / liquorice character tucked away on the palate. The most distinctive element, however, is the bitterness. Pirate Life have released beers with towering IBUs before, but tended to wrap them in a softening blanket of booze and malt; here, the bitterness is left unhindered to go to work on your palate with no little aggression.