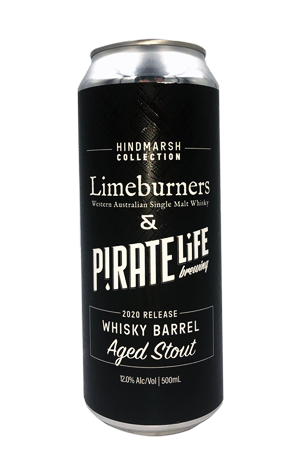 Back in the period when they were enjoying their prime moment in the (thin, reedy) sun, there was a good chance any review of Sigur Rós, whether performing live or on record, would contain the term "glacial". In all honesty, I'm pretty sure I fell into the trap when writing about ( ) back when it wasn't all beer. It was an easy / lazy shorthand for the Icelandic group's distinctive sound, but one that became something of a well-worn trope.

I mention this as the equivalent in the world of barrel-aged imperial stouts is "decadent" and the word came to mind while sampling the 2020 collaboration between Pirate Life and WA's Limeburners distillery. Their whisky barrel-aged stout – using ex-bourbon American oak – lands at 12 percent ABV, comes in twin 500ml can packs that mimic the tubes in which you pick up whisky and is, well, decadent and in all the right ways.

My sample came with a small bottle of whisky and, if it's the liquid the inhabited the barrels before the beer, we may as well start there, with its spiced honey and aromatic cinnamon-coated stewed apples and pears character. As for the beer, well, it packs plenty of sweet whisky and oak, with the former leading the way but with its sharper edges smoothed and its spicy nature subsumed within the beer to leave you with velvety, vanillin, caramel fudge lusciousness. It's creamy yet far from weighty despite the booze content, with a hint of leather and some drying tannic qualities there to tame the sweeter elements. Mighty enjoyable, lengthy on the palate, free of rough edges or any discernible heat, it's decadent in the self-indulgent sense – and I'm not sure the second can will survive the weekend let alone a year's cellaring.

If you want to go for a full sensory overload, grab some shit hot headphones, pour a glass, put on the highest quality version of this song you can find and be thankful you got to live in a world where people create such beauty.