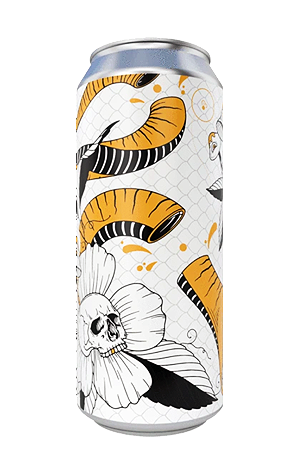 One of the very many beers Pirate Life have been pouring at the 2021 GABS festivals is the snappily-titled Rum Barrel-Aged Coffee & Molasses Baltic Porter. It's a beer with quite the backstory too: 4,000 litres of their Coffee & Molasses Baltic Porter went into oak casks previously used for rum back in late 2019; they spent eight months in them before being released and blended not just with each other, but also with some younger porter. Along the way, a spontaneous Brettanomyces ferment in barrel number three added an additional flourish, while they worked with Adelaide tattoo artist Harry Plane to create the eye-catching can design as the fifth entry in their art series.

As for what's in the cans, there's no mistaking the sweet, almost maple / treacle like enhancements contributed by the time in oak; the aromas could be those of a liqueur in the manner they rise from the oily, chocolaty, slightly roasty, ruby-tinged liquid. I pick up toasted coconut aplenty, perhaps what the brewers liken to biscotti in their notes, in an experience that's never less than intense, leaning heavily into dried fruit / molasses territory – even the coffee presents as that more dark fruit, dark sugar, viscous Turkish variety. The Brett adds a hint of acidity to ease the 10 percent ABV heft in a beer that's as much of a mouthful as its name.