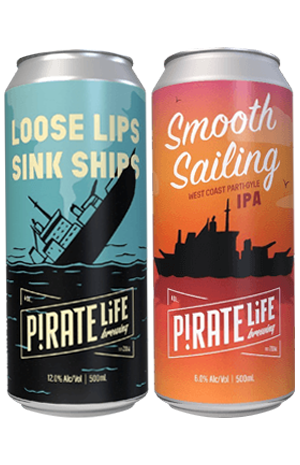 Of the two parti-gyle pairs released by Pirate Life in quick succession – of which you can read more here – our bottleshop spies tell us it's the IIIPA Loose Lips Sink Ships that's been selling the fastest. Given the target audience and the sort of beers that dominate the upper echelons of ranking sites like Untappd and RateBeer, it shouldn't be a surprise, what with all those Is, an ABV of 12 percent ABV and 100-plus IBUs (International Bitterness Units).

It's a beer that's been around before, initially as a GABS release, and this time reminds me of beers like Boogoop, the Mikkeller-3 Floyds wheatwine. Such is its boozy heft, it's less a case of picking out hop aromas than snuggling up in a soft blanket of faintly citrusy, syrupy sponge cake. It's even more like a barleywine to taste with that mouth-coating blanket of malts softening the bitterness while powerless to do much about the building warmth that spreads from tongue to cheeks to ears as the glass empties.

The beer made with its second runnings is Smooth Sailing, a West Coast IPA featuring a three nation hop lineup of Cascade, Mosaic, Kohatu, Simcoe, Nelson Sauvin, Enigma and Centennial. "Smooth" seems an appropriate tag too as it's at the gentler end of the WCIPA spectrum, with easy-going stone fruit and tropical hops set alongside a slightly sticky, light caramel character that hints at its bigger brother. It's punchier on the palate, where an earthy, resinous bitterness adds ballast.