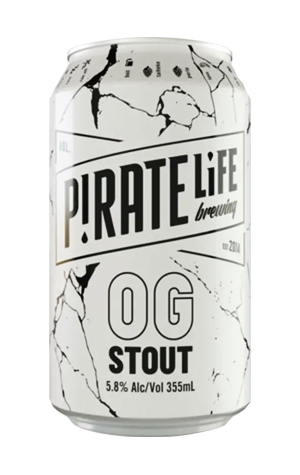 When Pirate Life first released a stout in cans, the tallboy tinnie'd Stout, it might have taken a few of the brewery's fans by surprise, in that it took inspiration from the traditional beers of England rather than the hopped up versions that followed in the States. Here, with OG Stout – a beer that's proving popular enough it may transition to a permanent slot in the lineup – it's a similar approach, albeit reined in a little on the booze front.

As with an OG stout from England, it's dark, bitter chocolate, roasted grains and an earthiness that lead the way, the last of these most prominent in the lingering bitterness. Less gnarly than its 500ml predecessor and more dark brown than black, but just as traditionally stouty.