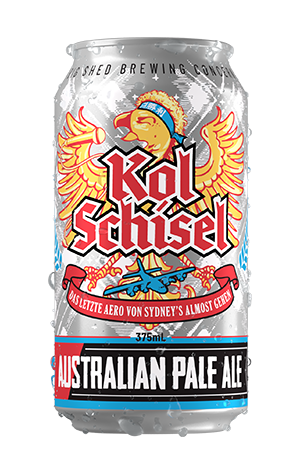 The arch-punsters at Adelaide's Big Shed have been it again with their latest release – and may have outdone even themselves. For their take on the German Kolsch style – released in a very limited number of kegs earlier in 2015 but later added to their core range – they've given it a good 'ol Aussie reworking that offers a nod to the rockers from their hometown that goes beyond the name KolsChisel. Take a close look at the artwork on the label and you'll spot Jimmy Barnes' headband and a microphone on the Reich-like bird of prey.

The beer itself is Big Shed's step into "gateway" or "sessionable" territory, what with their prior releases all being of the more confrontingly hoppy (or ice cream inspired) nature. As they say, it's "ale masquerading as a lager", which in KolsChisel's case means: "Subtle, bready malt flavours backed up with a hop spiciness that makes you want to come back for another."