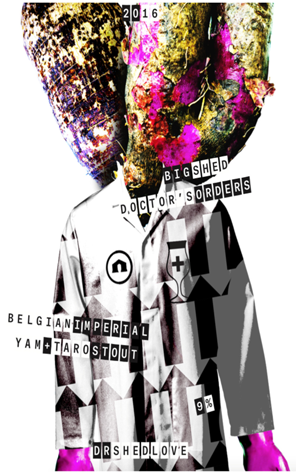 Last year saw the release of the first Dr Shedlove collaboration, an imperial stout saison behemoth conceived by Darren (Doc) Robinson from Doctor’s Orders and Big Shed's Craig Basford and Jason Harris. They said it would become an annual tradition, and so it is proving. And it's a rather unusual tradition as each year they've vowed to feature a different root vegetable. This time yam and taro take centre stage with with more 250kg peeled, cut and mashed in for this 9 percent ABV beer.

The Shedlove series will always be an experiment or, perhaps more accurately, a form of "seat of your pants" brewing as the guys tend to describe it. The 2016 version is a Belgian imperial yam and taro stout with a variety of dark specialty malts in there as well as Columbus, Magnum and Hallertau hops and, for good measure, oak chips. What's more, the lads also poured in one of the few remaining bottles of the 2015 release, calling it a "DNA transfer".

The final result pours pitch black to the naked eye but reveals a slight reddish hue once held up to a light. The large malt backbone lends the first sips a pleasant sweetness and a smooth balanced aftertaste with hints of raisins and currants present from the use of a Belgian yeast.

And here's how it all came together...