Beer Ocho Beer A Fox In The Cellar 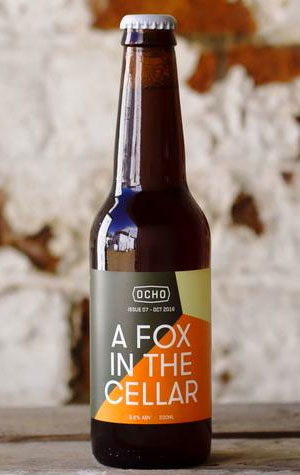 The Bière de Garde style hails from Northern France, along the Belgian border. It was a style brewed strong enough to be cellared for many months. Commercial examples come in a range of colours: blonde, ambrée and brune; ours is a foxy shade of red...

We brewed A Fox in the Cellar in May 2016, so it’s had over four months' cool storage, during which time it has mellowed and matured considerably. Expect super fine bubbles, with delicate lacing.

Bières de Garde put malt front and centre – we used a range of toasted malts to provide layers of nutty, bready, and spicy malt character. We also made sure that the malt is rich without being too sweet – the finish should be satisfyingly dry. Hops play a supporting role here, adding just the right level of spicy bitterness to make it rather moreish – which means it's a little dangerous at 6.8 percent alcohol...

An elegant and complex beer that will continue to improve if cellared longer.