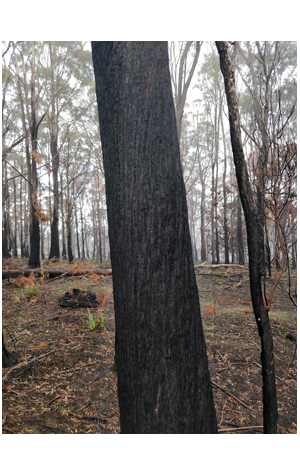 While there have been normal beers along the way for Tasmania's Ocho, such as the ongoing seasonal IPA range, it's fair to say Stu Grant is a brewer that likes to experiment, be it with barrels, yeasts or less-than-obvious ingredients. It's also fair to say the beer he entered as a GABS 2018 festival beer is one that fits into the experimental category. And then some.

Says Stu: "I conceived of the idea for the beer while walking through a local area of bush that had recently had a bushfire, and thought, 'What if I could get that mix of smoke and eucalyptus in a beer?'"

That led to the creation of a tincture with pure alcohol that was mixed that into the conditioning tank - just 40ml of oil in 1200 litres of beer was all it took – where it joined a dark lager base. Its smoky side isn't overly prominent, but that's in part because so many other elements are: menthol, the herbal tablets kids at my old school in the UK would eat by the handful, twiggy bark, sarsaparilla, a squirt of one of those all natural toothpastes. It's an odd combination but one that oddly works, even if it feels like a beverage that belongs to a different culture and a different time.