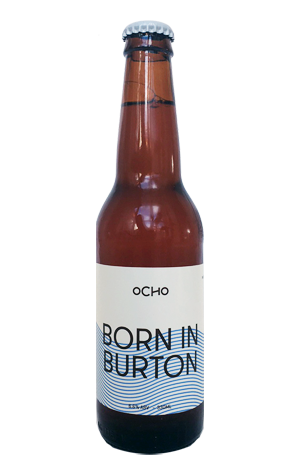 Years ago, when The Crafty Pint was yet to crystallise into something real, I was sat in a warehouse in Boronia with a bunch of homebrewers preparing for a BJCP exam while looking to improve my knowledge of beer and brewing. The term "Burtonisation" came up in a session on water.

"Did you just say 'Burtonisation'?" (Yes, I knew what I liked to drink but little else about the subject back then – it's been a steep and slippery descent since...).

"Does it refer to the place in England? Really? I was born in Burton!"

As "Eureka!" moments go, it's hardly up there with Archimedes in his bathroom but, with hindsight, it certainly provides some context to the subsequent life path. And the fact the pretty drab Midlands market town of Burton-upon-Trent where I was born (albeit never lived – The Crafty Kegs had just relocated from Edinburgh to the marvellously named Ashby-de-la-Zouch nearby) is globally famous for the manner in which its hard water helped create and define a beer style is one I rather enjoy.

All of which is a rather long-winded way of getting to this: one of two new beers from Tasmania's Ocho. Born In Burton is a tribute to the "grandfather of IPAs", a 6.6 percent ABV strong English bitter crammed with East Kent Goldings, Bramling Cross and Pilgrim hops. It's a far cry from the IPAs of today, a celebration of what you might term workmanlike hops as opposed to the showstoppers of today.

Sure, you'll find some Earl Grey like floral aromas and stewed fruits, not to mention some sticky sweet malts, in there but it's the old school hop derived bitterness that dominates. It's gnarly – not in the contemporary slang sense, but in the gnarly old tree sense. It's a bitterness that lies in wait on the fringes, waits for the sweetness and jammy fruits to make an appearance, then reaches up and drags them slowly, remorselessly away, replacing them with a drying, grippy, twiggy, earthy blanket instead, one that's enhanced with a touch of the tannic thanks to the addition of oak cubes during the brewing process.

If you've grown up on contemporary IPAs, you'll wonder what the hell is going on. But, equally, you'll understand why English Bitters got their name. And, if you'd like to take things further, Burton's football (soccer) team, Burton Albion, is nicknamed The Brewers, they play in an wattle-esque bright yellow and are in the highest league they've ever reached in their history, providing a pleasant counterpoint to the bloated corporate excesses of football's upper echelons. They also had Jackson Irvine in the team until he was pilfered by Hull City but, even without that Aussie connection, would no doubt appreciate any new fans, even from afar and no matter how tenuous the reasons...

They're packing four of these with four Baltic Porters, which we'll write about soon.