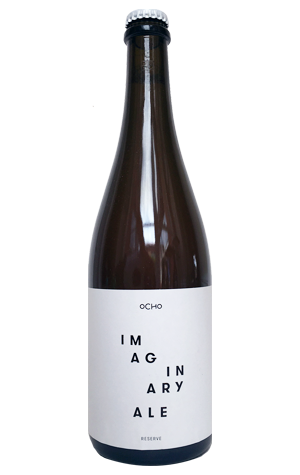 You could never accuse Stu Grant and his Ocho Beer project of being mundane. The original concept – to sell all beers direct to customers in mixed eight-packs, the elegant packaging, the choice of beer styles – a blended sour stout here, a hybrid featuring wine grapes there – all combined to make the Launceston based operation one of the most fascinating to launch in the past few years. Yet, even as those first beers were hitting the market, Stu was talking of his more longterm goals, of beers that would be that little bit more special, even less mundane, if you like.

And, now, the first of those beers are making their way from the barrels Stu keeps on Van Dieman's farm into 750ml sparkling bottles and on to drinkers' homes. This Imaginary Ale is one of two new releases and is actually a blend of two beers: four parts saison aged for seven months in French oak; one part golden sour. The stated aim was to create something with a character similar to the original farmhouse saisons of a couple of centuries ago and, while, short of a time machine, it's hard to comment on the success or otherwise of that endeavour, it's a beer worthy of the "Reserve" tag.

Pouring a hazy pale gold with a lively, dense white head (Stu advises chilling for at least 24 hours before opening as the carbonation is deliberating cranked up via bottle re-fermentation to set the zesty citrus and floral aromas free), it's equally full of body and subtle complexity. You'll pick up some funky farmhouse characters and there's little missing the effects of the time on oak, while the golden sour contributes a clipping acidity more than anything overtly in your face, ensuring the beer is as refreshing – despite its heft – as it is one to mull over.