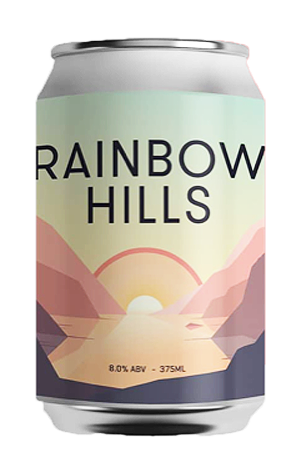 In a craft beer market populated by an ever-increasing number of players – many of them voraciously devouring hops – and in which there can be fluctuating availability of key varieties, it pays not to become too wedded to particular hops or recipes lest circumstances change. When they do, however, some brewers view a potential challenge as a chance to evolve and innovate, and that's the case with this release from Ocho in Tasmania.

Rainbow Hills is Stu Grant's evolution of his double IPA – building on foundations laid down by the now-retired Golden Double IPA – and features a quartet of US hops: Columbus, Simcoe, Citra and Azacca. It's not radically different from its forebear (although it was the first DIPA brewed at Miner's Gold, the brewery where Stu is now head brewer following a move from Van Dieman), pouring a thick, golden colour with a fresh peach and mango nose. Upfront it's clean with a hop character that, whilst on the subtle side, is in keeping with the overall flavour. There’s a pleasant bitterness, well balanced by a crisp, toasted malt character that, combined with the fruity hop aroma makes it easy to forget the 8 percent ABV.

Juice up front and bitterness at the back – for those that like it both ways.

Available direct from Ocho from Nov 1