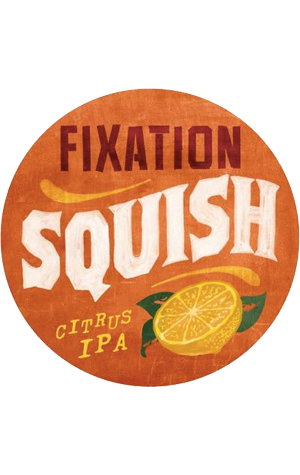 With its flagship IPA impressing beer judges and voters in the Hottest 100 Aussie Craft Beers in equal measure and a couple of batches of The Fix double IPA under the young brewing company's belt, where would IPA-only Fixation turn next? A session IPA? A different shade of IPA? Nope, they started playing around with fruit.

In recent weeks, a smorgasbord of different fruit additions have been trialled by the brewing team and, for their first citrus IPA, SQUISH, it's white grapefruit and blood orange that have earned the guernsey. That said, while they've earned the right to leave the brewery and hit taps around the country, it's still very much a pilot brewery affair: just nine kegs of this release of SQUISH will be hitting the East Coast.

Aside from the fruit, the beer, which we're told is paler in colour than the straight IPA (and slightly lower in alcohol content), features another US lineup of hops: Citra, Amarillo and Mosaic – expect plenty of fruitiness from them too. Fixation main man Tom Delmont (who you can join with The Crafty Pint on the evening of March 18 at Woolly Mammoth AKA Pint of Origin NSW at Brewsvegas) describes SQUISH as having a "clean but strong bitterness, with aromas of pine and tropical fruit ... supported by fresh citrus notes."