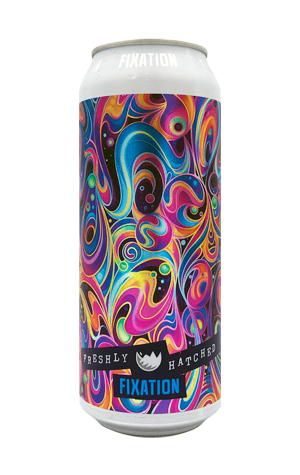 On Valentine's Day, the team at Fixation's Incubator brewpub in Collingwood bathed their venue in warm, bright lights. But this was no fuzzy, heart-hued red to mark the romance of the day (although there was hot pink in the mix); instead, walls, tanks 'n' all were turned into psychedelic scapes by Melbourne artist Ruskidd. Why? To herald the arrival of the brewery's second Freshly Hatched tallboy tinnie release, Dreamseeker.

The beer inside the eye-catching cans is tagged a "juicy IPA" (not hazy) but brings the juice with an intensity and vibrancy as opposed to the fatter, fuller IPAs often bearing such a tag. The Vermont yeast strain used in many NEIPAs is used to unlock the hops' tropical nature, with a little piney character in support, without encroaching on Dreamseeker's clean, well-defined structure, while bitterness is present and resinous without being overpowering.

A juicy IPA for those who prefer their IPAs with the punch of old.