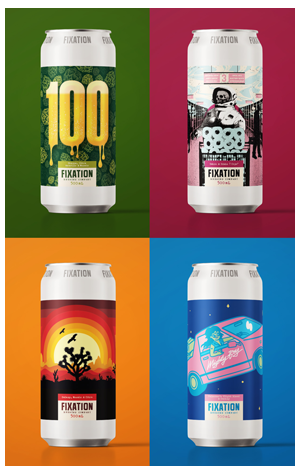 When they sent samples of their August Incubator quartet, the Fixation team suggested an order in which to try the beers (not that I was planning on taking on all four at once, of course). It's the order they're listed above, but for the purposes of this write-up let's start at the end. Why? Because they've returned to the striking labels that were replaced temporarily by more generic decor with the previous trio and Social Space perhaps captures the moment – at least for a brewery based in the heart of stage 4 Melbourne – best of all.

The oat cream IPA comes with a skeleton in a spacesuit pushing a trolley full of toilet paper through a washed out, dystopian supermarket aisle complete with signs reading "WELCOME TO HELL". On offer are such delights as Existential Dread, Anxiety Snacks and Injectable Bleach (the Racist-in-Chief's second appearance on a Fixation can in weeks). If that all sounds rather grim, succour is found inside, at least if you're into IPAs of the pale, lightly hazy and sweeter kind. Sabro and Idaho 7 offer up candied lemon and grapefruit, dankness (although not too much in the way of the former's tropical cocktail stylings) with plenty of sherbety, lactose-enlivened malts for company. It’s not heavy or dense despite its 8.5 percent ABV but it is for the sweeter toothed IPA fan.

Returning to the order prescribed, Mighty Boy is a session hazy IPA complete with third eye'd Thelma heading into outer space with a pink Ute full of hops. Galaxy's passionfruit vibe is unmistakeable while hop blend Falconer's Flight aids the Aussie superstar in layering melon, lemon citrus and a touch of resin into what’s a very easy-going showcase of New World hops.

100 marks one hundred brews at the Incubator and celebrates the occasion with a doffing of the cap to the beer that started it all. It's a juicy version of Fixation's flagship IPA and lands with a fatter aroma that sees the fruitier side of the hops boosted and, it seems, the sweeter malts maybe a little more restrained. Whatever they've done, juicy citrus, tropical and stone fruit characters dominate while they've left in a pretty potent bitterness, presumably as tribute to its forebear.

Which leaves the Kyuss-referencing Blues For The Red Sun, a beer whose bold label – in the context of Social Space – could be read as birds of prey circling, awaiting the moment they can start plucking at our pandemic-exhausted carcasses. If that were the case, it would be a fine final beer; my pick of the lot, this mahogany-hued red IPA is a nicely judged balance of heartier malts - sweeter, nutty, treacly, cake crusty - with dark citrus and red berry hops that's extremely drinkable even at 7 percent ABV.