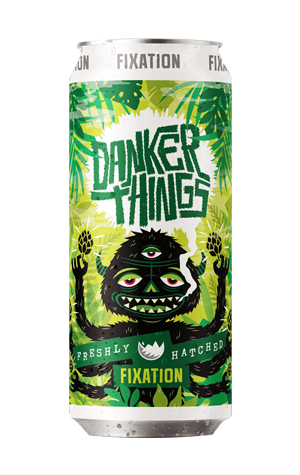 Since the nationwide shutdown in March, it's not as if Fixation have been holding back when it comes to releasing beer in tinnies. Like pretty much everyone else who'd lost much of their traditional means of reaching customers, the need to put as much IPA into package as possible saw a steady stream of 500ml cans leave the Collingwood Incubator. But their Freshly Hatched beers are those they deem worthy of a wider release. And this is number three.

Danker Things comes with label artwork by local Melbourne graphic artist and musician Adam Collins, who's been helping them turn around labels in "ridiculously fast timeframes" through the pandemic. It's also been around before in a far smaller run before and returns just as loaded with Fixation faves Mosaic and Citra (14 grams per litre over three dry hops – early fermentation, late fermentation and maturation, according to brewer Sam Bethune), meaning you can settle in and await a wave of tropical fruits to wash over your palate.

If anything, it might be a little crisper than first time around (as crisp as a 7 percent ABV, TDH hazy IPA gets!) and slips down just as easy.