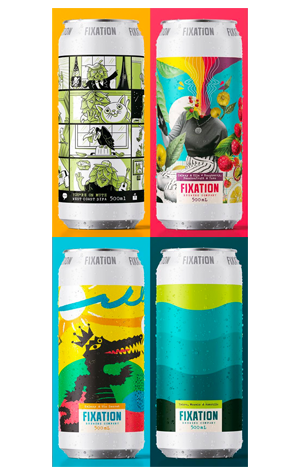 One of the boons for fans of Fixation's IPA obsessions through COVID-19 has been the brewing team's decision to release more beers in 500ml cans. Here they follow up May's quartet with four more, each bearing eye-catching labels from a selection of artists, including Fixation main man Tom Delmont's brother Will.

You're On Mute comes with a comic strip design, complete with Donald Trump as a hop flower on mute, and takes the form of a West Coast IPA. It pours with the sort of golden glow that makes you wonder if this was the mysterious object in the Pulp Fiction suitcase. The crystalline hop characters are just as bright, flitting from bubblegum to pine with a kinda creamy and almost nougat like sweetness in the mix too before a lime-tinged bitterness jets in to form a neat landing strip right down the middle of your tongue.

Hearing Colours is another addition to their fruit IPA lineage that started with Squish and, thanks to the additions of raspberry, passionfruit and yuzu purée looks like guava juice in the glass. Unlike Squish, this is less a case of using fruiting to embellish an IPA as fruit as master and commander with the Ella and Galaxy hops there to supplement the lively, tropical-punch-poured-over-berries aroma. Tart and quenching on the palate, presumably due to the combo of fruit acids and hop bitterness, it leaves a puckering finish akin in character to a freshly squeezed grapefruit juice. tl;dr: fruity.

Oi! is a showcase of Victorian grown hops in the shape of Galaxy and Vic Secret and it appears they didn't hold all of the additions back til later in the brewing process as is de rigeur these days. Why? Because this comes with a bitterness that lets you know there's an IPA in your glass, like when IPAs were IPAs. It's the colour of mango flesh and serves up mango, stone fruit and melon vibes plus that grippy bitterness that ensures it finishes with a drying bite.

And that leaves Seismic Wave, the can featuring Delmont Jr's artwork. Tagged a black IPA but not quite into black territory – more schwarzbier-esque cola – the aroma is reminiscent of fruit creme-filled chocolate, further rounded out by Sabro's distinctive coconut cream stylings, which are even more apparent to taste. The “black” characteristics are kept well restrained other than a little dusty chocolate and roasty dryness that helps keep this BIPA pretty light on its feet.