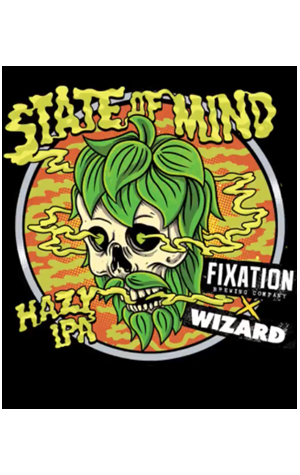 As seems to be the case with many people at this time of year, there's a cold that refuses to die hanging around Crafty Towers at the minute, meaning beer sampling has been outsourced where possible. Including here, when I arranged to meet Slowbeer founder Chris Menichelli at The Incubator and asked him to offer his thoughts on the Fixation-Wizard collab as I luxuriated in chilled, draught soda water. The result suggests I should hand him the reins full-time as a couple of sniffs, a few sips and the words came a-flowin'.

The beer is a NEIPA brewed with all Aussie hops, including Galaxy, Vic Secret and Enigma, that's beyond hazy – beyond opaque, if such a thing was possible. According to Chris, while there is your typically Aussie passionfruit and mango, it's not a juice bomb by any means. Instead, there's plenty of fresh hop resin at work in a beer that's dank and, thanks to a bigger bitterness than usually found in such beers, has a surprising length on the palate.