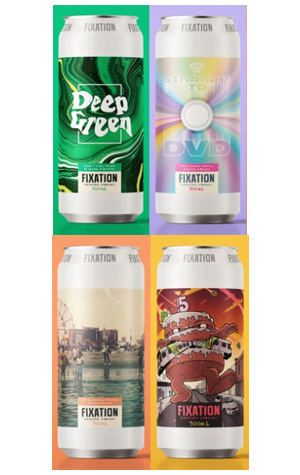 For IPA lovers, one of the boons of COVID-19 has been Fixation's decision to go from very occasional limited releases in cans to no less than 28 in eight months. The final foursome for the year lands just ahead of summer and covers a few bases too.

Straight To DVD is a pretty straight down the line hazy, the sort of beer Sam Bethune has been perfecting over his time at the Incubator: citrusy, tropical, a little sweet, a little bitter, and not around for long in your glass.

Deep Green pours a slightly deeper orange and possesses a more potent aroma. It's a little sweeter than DVD, mixing a dankness with stone fruit. There's a prickly texture and bitterness in a beer that's punchy and alive.

Possibly my favourite of the four is Sparkle & Fade, a lean, mean hop machine, in which there's a collection of big name New World hops but with Nelson Sauvin claiming bragging rights. There's a white wine character shot right through its tropical heart, while it's bright as anything, with a palate-coating viscosity despite finish dry as.

Which brings us to fifth birthday beer, Piece Of Cake. As the name tells you, it's cake-inspired and, while it's far from a waddling pastry pie, it's also a long way from being your trad IPA (whatever that means today). Very pale and hazy in the glass, it's an appearance that doesn't prepare you for the sweet choc orange which is its defining characteristic, augmented by a little coconut and vanilla from US hops Sabro and HBC 520.