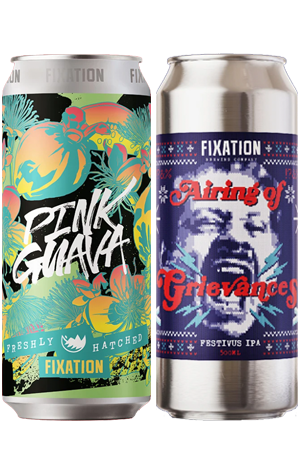 The holiday spirit is in the air at Fixation: restrictions are gone, punters are back, there's a new head brewer at the helm, and Christmas is fast approaching. Before we get to the festive beer, however, there's the does-what-it-says-on-the-tin release Pink Guava. The Collingwood crew are still calling it an IPA, but this clear, pink offering sits somewhere between a young, juicy, summery rosé and a glass of Bickford's cordial. The guava purée also adds a tanginess as well as a sweetness that lends this entry in the Freshly Hatched series an almost kettle sour-esque quench.

Very much in IPA territory is their Christmas – or at least Festivus – release for 2021, Airing Of Grievances. This hazy IPA featuring Citra and Mosaic in intensified Lupomax and Incognito form, as well as straight up-and-down Galaxy hops, might only weigh 6.8 percent ABV, but it hits with the force of some Frank Costanza truth bombs to the point if you told me it was a double IPA I'd believe you.

The beer practically oozes its way out of the tin, clouding your olfactories with dense, stewy 'n' sweet tropical fruits, passionfruit curd, and crumbled cake base malts, before leaving a blanket of hop oils across your palate. If instead of beer it was part of your festive celebrations, it would probably take the role of the post-pavlova snooze.