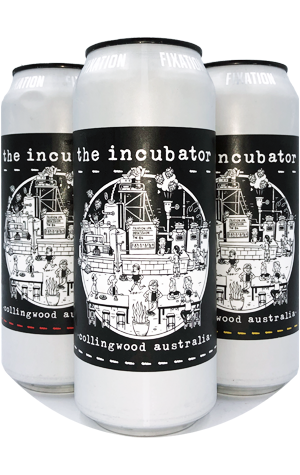 After gearing up to welcome guests back only to have to shut their doors again, Fixation have moved quickly to put more of their Incubator beers into cans. In the case of You Tell Me, it's a NEIPA and one that could be submitted as evidence they know what they're doing with such things (there's a fresh batch of their regular NEIPA, The 86, out in big cans too, by the way). Deeply hazy and grapefruit juice like in appearance, there's fruit aplenty, with pineapple leading the way, and some lively, fruit juice prickle to the texture, albeit wrapped up in a cotton woolly softness.

Symbiotic Robotic, however, comes at your palate with fists ungloved. It's a black IPA featuring Cascade and Simcoe in which their earthy, piney nature plays a bit part role. Commanding your attention are rather more boisterous elements: liquorice leads the way before a smoky, leathery, bitter umami character rises, bring a drying, roasted bitterness in its wake.

And completing this trio is Blush, tagged a sour IPA but not one in which you should expect to find any of the bitterness once assumed to be part of an IPA's DNA. Hibiscus flowers have been used to create a liquid with a vibrant red, almost Tizer-esque, colour, while there's a floral fruitiness and a hint of souring bacteria on the nose, and a clip of refreshing acidity that makes it all rather reminiscent of a soda pop.