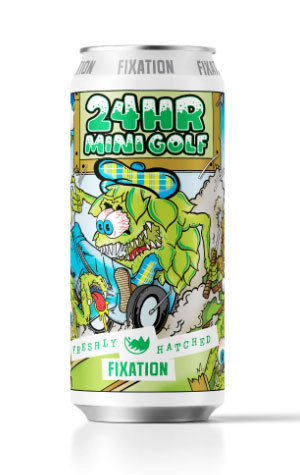 Who doesn't love a spot of mini-golf, that great leveller where a four-year-old seems to have as much chance of nailing a hole-in-one as a seasoned pro. That said, take one look at the cans on this Freshly Hatched release from Fixation and it probably should have gone with the crazy golf moniker. The blazed hop monsters bring to mind some of the golf tournaments I’ve heard about during beer weeks, during which players make their way through a can with each hole with results you can imagine.

So, how do you recreate that in liquid form short of filling the can with absinthe…? With an 8.4 percent ABV oat cream IPA featuring Amarillo, Mosaic and Sabro hops, it seems. Lower-than-typical carbonation adds to 24 Hr Mini Golf's viscous, syrup from a fruit medley pot tin nature, albeit with a tanginess enlivening proceedings and a roundness of texture that feels like the lactose getting it on with Sabro's coconut oil qualities. Gazpacho as double IPA, anyone?