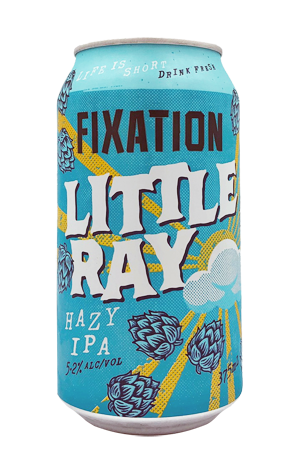 When you've got the sort of track record the Fixation team has amassed in the few years since launching, you're always going to approach a new nationwide release with a degree of confidence. If they're going to back one of the beers developed at The Incubator to be scaled up and released in printed cans, they're going to be happy with it. And, quelle surprise, Little Ray is another cracking addition to their canon.

He pours with a deep, smooth haze and a steepling, fluffy head – all the better for delivering pithy tropical aromatics (with a touch of the herbal) straight into your olfactory system. There's a sherbety, citrusy sweetness on the palate at first, joined by flavours of mango before a slow-building and broad, oily bitterness settles in. It's reminiscent of the State Of Mind hazy brewed with Wizard earlier in the year, albeit with a lower ABV. And, in an era when it's common to talk about big beers hiding their potency well, here things are the other way around; in terms of body and constitution, Little Ray is like namesake Sugar Ray in punching above his weight.