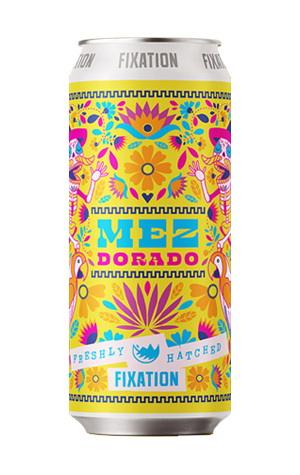 Let's be honest: Fixation's first Freshly Hatched offering for 2022 – beers they package in greater volume than most of their limited releases – sounds like a hot mess. It's an El Dorado dry hopped, kettle sour IPA featuring organic agave syrup, orange, lime and $4,000 worth of Del Maguey Mezcal San Luis Del Rio Azul. Well, either a hot mess or an excuse to host a launch party with a Mexican food pop-up and Mariachi band at your brewpub.

Hats off, then, to the brewers who knew what they were doing when they decided to give the beer a life beyond The Incubator, in the main down to keeping the disparate elements in check and not allowing any one of them to run rampant. That's not to say you can't tell what's going on, but it's more subtly tart than sour, the mezcal's smokiness is reminiscent of the charred character of Mexican corn or a fresh-from-the-grill tortilla rather than overpowering, the lime is neither too sweetly cordial like nor sharp, and there's a pleasing, lightly salty texture at play too. Add in can artwork by local artist Justine McAllister and you've got a fine – and fun – Fix in your hands.