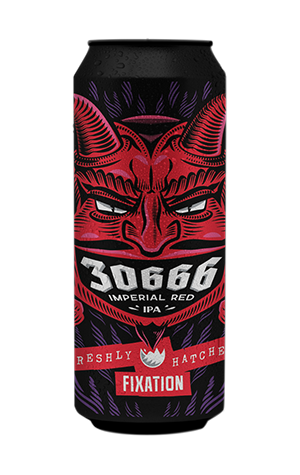 Fixation’s Freshly Hatched beers are the brewery’s series of one-off IPAs that are born in their Collingwood home and give the IPA-focused brewery a chance to really get creative. For winter 2021, they’ve gone with a beer that’s a long way from their flagship and a fair way from many IPAs too: a rich Imperial Red IPA. The beastly beer's name of 30666 pays reference to both Collingwood's postcode and the number of the beast, with the beer clocking in at the satanic 9.666 percent ABV.

Lurking within is a rich and slightly boozey beer that is heavy on the malts, though where hops still have a chance to shine. The combination of Nelson Sauivin, Amarillo, Simcoe and Ekuanot hops largely let a dank pine aroma fly out from the beast but on tasting it, there’s also a sweeter fruit note, which the brewery refers to as candied apple but I picked up as slightly more like walking into an old fashioned lolly-store. There’s also a soft vanilla note that further contributes to the beer's softer edge and makes it the kind of IPA you might want to match with dessert. Perhaps this beast should be embraced rather than beaten?