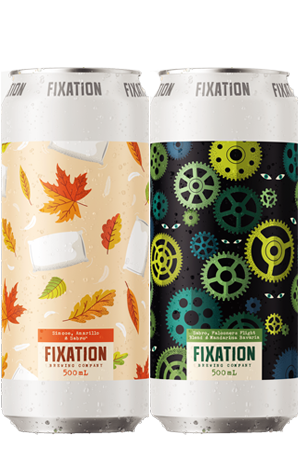 Completing the quartet of tallboy tinny releases from their Incubator in little more than week – following on from Danker Things and Half Cut – comes another pair of IPAs from Fixation. Fall is the first time they've put one of their spins on the increasingly popular oat cream IPA style into cans. It's not the densest looking pour for such a beer, not overly bitter either, instead centred around smooth, almost vanillin orange and passionfruit creme aromas and fullness of body, with a lemon slice like sweetness topped with a sprinkling of coconut (there are Sabro hops in the mix) completing the picture.

As for Quick Fix, it's about bloody time they used the name. It's years since I sent main man Tom Delmont a photo of the chalk menu at an ice creamery in Merimbula where they had various "Fix" options to pick from, with Quick Fix the standout. They forgot to acknowledge this on the label, but hey ho, there's so much going on right now the odd thing is bound to be missed†.

It's brewed with kveik yeast, thus a play on words as well as a description of how fast the yeast operates – three days initial ferment at a feisty 35C before a period settling into itself. It's much deeper in character than Fall, with the dense orange haze home to dank, tropical, even earthy aromas. Flavour wise, it has that stewed, bashed fruit character kveik can contribute to hoppy beers, alongside a persistent, resinous bitterness, all of which comes together to create a moodier, swampy kinda vibe when set aside its softer, flightier stablemate. One for those who prefer a IPA they can dig into.

† If Tom has any recollection of said text I'll be amazed!