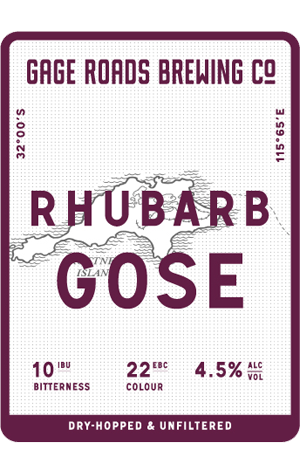 It's fair to say that those who'd been following the Gage Roads story up until a year or two ago wouldn't have expected to see a gose leaving the brewery anytime soon. Then again, who would have put money on them taking out Champion Australian Beer at last year's Australian International Beer Awards?

Thus it is that Gage Roads continues its merry path of expectation puncturing with its first limited release of 2017. The Rhubarb Gose is a draught only release brewed with rhubarb roasted in house at the brewery and is Gage Roads' attempt "to put our spin on" a style they describe as "one of the stories of the summer."

The 300kg of rhubarb was added at several stages in the brewing process to "bring some added complexity to the sour notes," according to head brewer Aaron Heary, while we're told the beer pours "a hazy coral hue, rising into a tightly beaded pink head" and comes with "delicate aromas of red fruit, lemon and yoghurt", not to mention "roast rhubarb and berry compote." No need for dessert after that, we imagine.