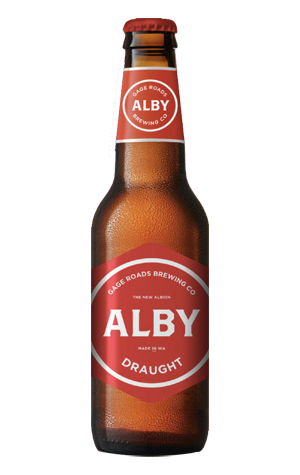 “WA’s newest, old beer” comes courtesy of Gage Roads with clean beer and marketing designed for mass appeal and, presumably, hoping for the sort of success enjoyed by Lion's Furphy. Along with its mid-strength fellow Alby – the Crisp Lager you're likely to find pouring at the new Perth Stadium – the beer takes its name from the city's original commercial brewery, the Albion.

The Albion Brewery, which went on to become the Stanley, the Emu and finally the Swan Brewery, put out a beer nicknamed "Colonial Twang" by locals – a "heavy, black and bitter" beer "to be consumed only as a last resort", according to The Breweries of Australia. With Gage Roads now WA's largest brewery following Swan's closure, this lineage-of-sorts makes sense, even if the Alby beers are far from heavy, black and bitter.

Draught is the relatively carefree version of the Crisp Lager that helped secure the Palmyra brewery the keys to the largest beer drinking audience in Western Australia and its release runs parallel to craft beer's recalibration towards sessionable beers and, indeed, lagers. It comes with the description “no fuss, refreshingly honest” and clearly hopes to find its way into the fridges of drinkers wanting something local that's not a million miles from those brewed by the Albion's latter day descendants.