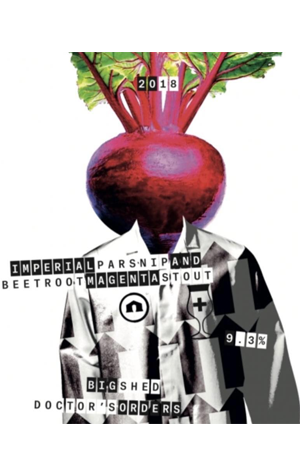 Sweet potatoes, yams and taros, carrots and now, in 2018, beetroots and parsnips. Such is the progression of root vegetables used in the Dr Shedlove collaborations between Big Shed and Darren "Doctor's Orders" Robinson over the years. Doc touched down in Adelaide earlier this year for one last hurrah, with the final chapter featuring 50 kilograms of beetroot and 100 kilograms of parsnips and taking on the the appearance of a white stout, in other words one that's IPA like in appearance except for the slight pinkish hue summoned from the beetroots.

The aromas are dominated by big, earthy tones, balanced by a touch of sweetness. A thick, creamy head lingers on top of what's a super confusing beer given there are so many flavours present. Thus, there's no one dominating factor; instead, your palate is met first by beetroot then treated to a mélange of sweetness, roast, earthiness, something a tad grassy and some bitter coffee before everything merges together to create something not dissimilar to a Monte Carlo raspberry jam and cream filling. Yet, even though there is a noticeable sweetness, The Final Chapter finishes quite dry and has a solid bitterness from the use of Enigma hops.