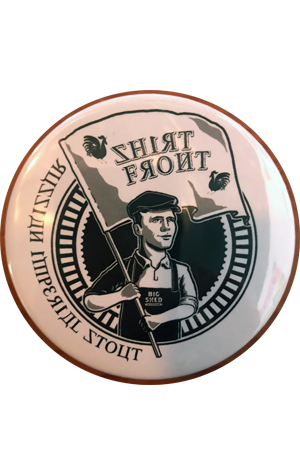 Taken literally, a shirt front is exactly that: the front of one’s shirt. However, used as a verb, it describes the action of charging into someone head on. In 2014, then Prime Minister Tony Abbott promised to shirt front Russian President Vladimir Putin, a rather comical promise that hasn’t been forgotten by the Big Shed crew (and which stands in stark contrast to the approach another world "leader" has been taking to the Bear in recent times). Thus it was that when they wanted to make a Russian imperial stout for winter 2018, The Shirt Front was the logical name.

The beer itself is one to which vanilla paste, cocoa and 20kg of Presstwood Coffee was added for an extra charge. Dark brown with a rich brown head, it sends pungent yet silky coffee aromas marching up your nose with hints of chocolate sidling up behind. A thick, syrupy mouthfeel makes way for a huge whack of roast and strong coffee flavours, again with a little creamy chocolate appearing right at the end. The dark grains and coffee lend The Shirt Front a drying bitterness in a beer that's all about the coffee, presumably to give your shirt front an extra charge.