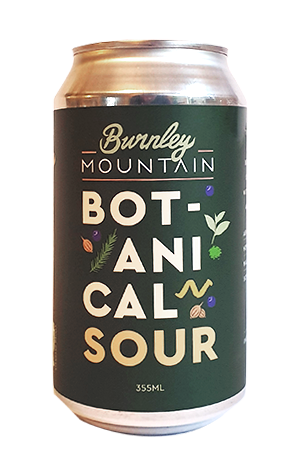 Presumably brought together by their shared names [Are you really leading off with that, Ziebell? – Editor], soon after meeting Burnley Brewing’s Michael Stanzel and Mountain Distilling’s Michael Harris decided to brew a beer together. Initially released at GABS 2019 and followed up with a wider can release, the collaboration the two Michaels landed on is an attempt to capture the distillery’s gin in a can. To do that, they decided on a Berliner Weisse hopped with Citra and brewed with the mix of botanicals found in Mountain Distilling’s flagship gin: a mix of juniper, lemon myrtle, coriander, orange peel, pine needles and pepperberries.

On the sour-ometer, it’s towards the gentler end, where there’s a light tartness that matches with the most pronounced of the gin-based flavours: the lemon myrtle, orange peel and juniper. The peppery and zesty coriander notes come through too, making for a beer that, like so many modern Australian gins, is particularly refreshing. It’s almost a shame GABS ushers in winter, rather than sees it out…

Join them for the launch on June 6