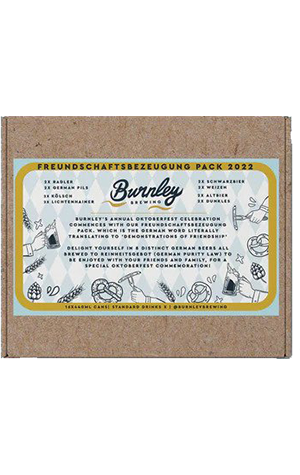 Following the success of Zusammengehörigkeitsgefühl, Burnley Brewing have welcomed Freundschaftsbezeugung for 2022. OK, you may have questions about those statements and that’s fine. After COVID scuppered their Oktoberfest last year, the Melbourne brewery decided to release multiple packs of traditional German beers with a German word that translated to “the feeling of togetherness”. It was such a widely popular concept that the brewery decided to do another pack a year on and this time around, they gave it a name that translates to “demonstrations of friendship.”

Those packs are available here and there are eight beers in total with each case containing two of each, so we best get stuck into them. In order from lowest ABV to booziest, Radler (3.2%) is Burnley’s tribute to the lemonade and beer combo we rarely see in Australia. Here they meld the kind of lemonade you might buy from a stand run by tiny capitalists with a crisp base for a light and refreshing beer fit for the start of an afternoon in the biergarten. Kölsch (4.2%), meanwhile, is another beer we see rarely these shores and here the ale-meets-lager’s subtle fruit notes and very soft sweetness are a reminder that beauty can be found in restraint.

Lichtenhainer (4.2%) is the second time Burnley has returned to the brewing archives of Jena, with the smokey and sour beer combining the gentle hum of ham you’d expect from a Rauchbieer with the refreshing tartness of a Berliner Weisse. If you’re seeking further refreshment, German Pils (5.1%) could be the way to go, with this one packing light touches of floral aromas from the Noble hops before a clean and bitter finish rules the day.

Altbier (5.2%) is one of two releases representing Germany’s darker beers, with the Dusseldorf-inspired ale bringing a mix of dried fruits flavours and slightly sweet notes of freshly-baked bread. Dunkel (5.2%) goes richer again and feels like it's both an autumn or spring beer with the dark lager offering a chocolaty, roasty and nutty blend with a sweeter touch of biscuit.

Zwickelbier (5.5%) is yet another name we don’t often hear in Australia’s beer industry, with the unfiltered lager similar to a kellerbier. It may be designed to be drunk straight from the beer tank but if you love cracking a tin and enjoying a creamy, textural and floral lager with flavours of dry biscuit, then you might just feel you’re in the shadow of the brewery when you’re drinking it. Finally, that brings us to Weizen (5.5%), a favourite style of Burnley’s head brewer Michael Stanzel. Indeed, Michael loves making wheat beers so much that he designed their new brewhouse with the style in mind, and when you drink in the creamy, smooth beer with its balance of cloves and banana, you might just become a Weizen convert too.

NB If you're a member of our beer club, The Crafty Cabal, and are reading this in time, you can enter a competition to win one of five packs.