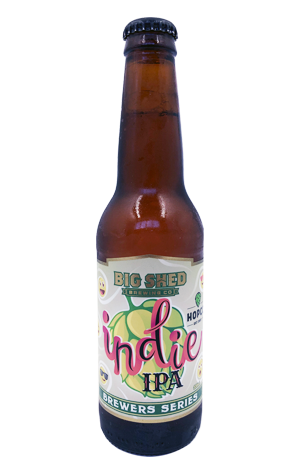 At BrewCon 2019, a number of brewers were invited to create beers with new and/or experimental hop varieties. Among them was Big Shed, who went to work with a rarely seen (as yet) Kiwi hop going by the name HORT 4337. The Royal Park team kept the malt bill relatively simple – a base of pale, some oats and wheat for body and a touch of light crystal to balance the bitterness – with the intention of allowing Indie IPA's single hop to unveil its full potential.

Pouring a bright orange, the aromas are pretty intense from the off: rockmelon, passionfruit and a touch of lychee combine on the nose with fleshy peach and lychee coming through strong on the palate, supported by a smidgen of passionfruit. There's a fair bit of sweetness offering balance throughout too, with a controlled bitterness contributing to a medium dry finish.