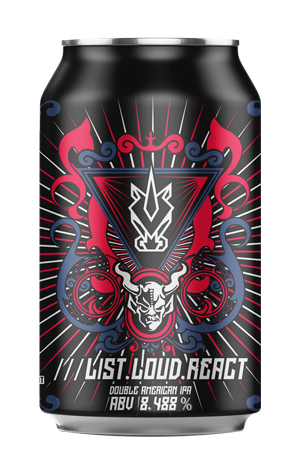 Collaborating with one of the largest and most influential craft brewers in the USA was not something Blasta owner Steve Russell ever thought he’d be doing while homebrewing in his kitchen just three years ago. In a similar sense, it’s doubtful Stone co-founder/owner Greg Koch ever expected to be on tour with one of the world’s best-selling bands, Metallica, when he and Steve Wagner started telling drinkers that they weren’t worthy in 1996.

Although the 2019 Metallica tour has been cancelled, conversations about a Blasta x Stone collaboration to launch the Australian tour had already reached the point of fermentation – too late to stop now! So, in honour of both breweries' West Coast roots, LIST.LOUD.REACT. was designed as a massive double West Coast IPA in collaboration with Greg plus Stone’s head brewer Kris Ketcham and innovation brewer Jeremy Moynier. As you might have predicted, the beer is rammed with more hops than any previous Blasta beer: a total of 18 grams per litre, split between US Citra and Amarillo and Australian Vic Secret.

However, for all the brashness, details like the water profile – one created to sit midway between Escondido and Burswood's mineral levels – and a booze presence that references the Burswood brewery’s address, show subtle consideration. Perhaps the most obvious element of the collaboration is the use of the what3words app to generate the beer’s name according to a 3x3 metre position, in a similar manner to another recent Stone beer. LIST.LOUD.REACT. is the global reference point for where bands and DJs perform at Blasta; thus a fitting name for a tour launch.

Lurid yellow in the glass, LIST.LOUD.REACT. comes on first with mango and assorted tropical fruit, supported by a juicy citrus and resin undercurrent. Although not overly forward, alcohol sweetness provides balance to a bitterness that manifests more as a perceived dryness than a hoppy assault, leaving the whole experience dangerously drinkable.

Launching at the brewery on Oct 18