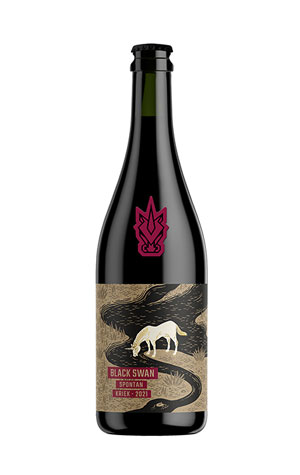 Black Swan Spontan Kriek 2021 marks the beginning of Blasta’s wild cultured beer releases, and for a brewery built on energy and pace, this has been an exercise in patience. Just over two years ago, the program began with a number of barrel-aged lambic-style Belgian ales, some of which were later blended with a portion of wort which had rested overnight in the Upper Swan Valley – collecting local yeast and bacteria in the process – as the base for this inaugural release.

Pleased with the progress, and with a strong affinity for the kriek style, Blasta founder Steve Russell sourced Belgian Morello cherries – an authentic addition – to soak in the then one-year-old liquid, resulting in a vivid cherry hue and flavour.

Despite the glacial gestation, Black Swan is still young, and its bright, crunchy cherry character leads on the tongue, with a marzipan undertow and a little Euro liqueur depth – sans syrupy weight. Skin tannic mingles with fruit tartness, and although Belgian-inspired, Black Swan cuts more of an Australian wild line with acidity, barrel influence and funk more delicate than some may expect; that said, the latter will continue to develop in the bottle for those that can wait. Don't get me wrong, however: there is an elegance and maturity here which ably echoes the style's origins.

Reflecting on Blasta’s wild cultured debut, Steve says the endeavour is the “culmination of first-class ingredients, the natural environment and time”, one which also collected a gold medal at the 2022 Perth Royal Beer Awards.

Available from the brewery.