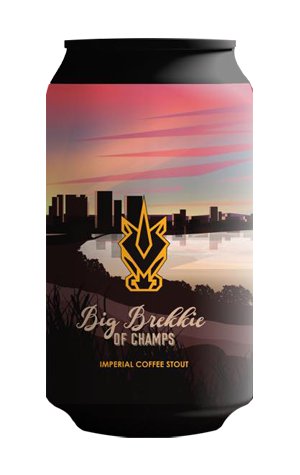 Blasta’s Steve Russell has been refining Big Brekkie Of Champs over the last few years. And by refining we mean finding more adjuncts to add to this winter release.

On the lighter side of imperial, but still at a weighty 7.3 percent ABV, Big Brekkie Of Champs now weaves six different specialty malts, coffee, organic maple syrup, cacao nibs and vanilla into an opulent kickstart to the day – if that’s your thing, of course. Mostly likely, it's a nightcap for everyone else – we’re not judging, but what’s for morning tea if this is where your day begins?

The pronounced coffee and maple nose are rounded by soft, semi-dark chocolate aromas which become rich and full in the glass. Coffee is used regularly in darker beers and the Blasta team have done well to source roasted ripe beans that avoid green capsicum notes, instead imbuing Big Brekkie Of Champs with a round coffee character. When swirled with the nibs, this turns mocha-like through the initial creamy body before moving semi-dry, then closing with dark chocolate and coffee bitterness.

In a very non-2020 move, by omitting a lactose addition, this imperial stout feels gleefully old school and reminiscent of early Mikkeller coffee beers too.

Available from the brewery and Blasta stockists nationally