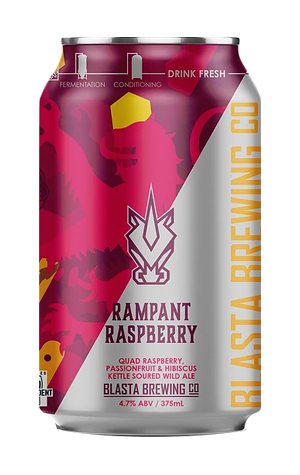 What began as a beer for GABS 2019 has returned plumper than ever. It’s no secret Blasta’s owner Steve Russell has an affinity for fruited beer but this takes things to a new level. Four fruit additions were made throughout Rampant Raspberry’s creation and it shows.

The gloriously hot pink beer leads with raspberry, masses of it, before being joined by passionfruit and suggestions of cranberry from the hibiscus addition. Although brightly acetic, there’s a whipped fruit smoothie creaminess at play with a berry tartness that elevates beyond Rampant Raspberry beyond simple kettle sour territory.

Available in limited release from the brewery and Blasta stockists nationally.