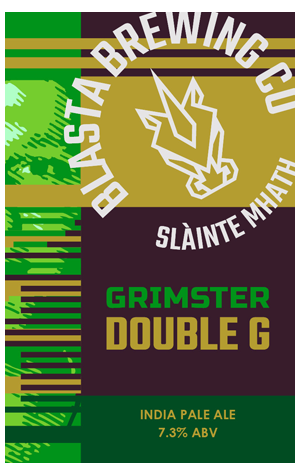 It’s hard to believe Blasta will be two years old on March 1. Given the massive progress and influence on the WA scene, plus national distribution, it feels as though the Burswood crew have been around far longer.

A mere three years ago, owner Steve Russell was homebrewing in his kitchen; since then Blasta have tripled in capacity, opened one of WA’s largest beer venues and collaborated with an icon from the US beer scene for List.Loud.React, a beer that made our Best New WA Beers Top 5 for 2019. Fans of that beer will be pleased to know Stone Brewing are repaying the collab Stateside this year.

And so, despite seemingly endless energy and momentum, it’s a rare pause for reflection in which Double G is launched among the birthday festivities. A scaled-up version of Grimster Rocks, a beer named after Steve’s brother Graeme who passed away unexpectedly in 2010, Double G brings the learnings of the past few years into a modern IPA displaying finesse and technique.

On a classic US IPA malt base, Mosaic lupulin powder, Citra and Amarillo showcase perfumed mango and ruby grapefruit aromatics which move punchy and plump in the glass with stonefruit in support. While not a #hazyboi, it’s an exemplar of the recent hop fog influence across all beer – hop aroma and flavour have become juicy and better expressed – although Double G keeps it Old School by running dry and tightly bitter.

Launching at 5pm on March 1 at Blasta's birthday bash, featuring food and beverage specials and a seven-piece band