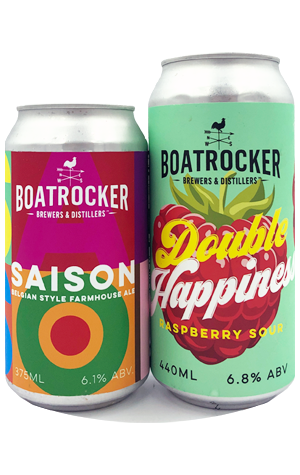 Given the many elements that now sit within Boatrocker – the core range beers and hop driven limited, the annual, big name, barrel-aged beers, the sour program, the distilling, for example – it's perhaps little wonder the Braeside brewers tend to drop their beers in clutches. And, as we enter spring 2020, there's four new releases doing the rounds, so we thought we'd split them in two: the cans and the bottles.

Boatrocker have released many a saison over the years, although arguably none as straightforward as Saison (maybe the simplicity of the name is the clue...). There's some soft lemon alongside flashes of the esters typically thrown up by saison yeast strain, while to taste you'll find bready malts and a touch of honey sweetness, but don't go in looking for anything overt on the spicy, peppery, tart front as this is a rather simpler affair.

Double Happiness can be described rather simply too. Not necessarily in terms of the experience of drinking one, but in terms of what it is: it's their Miss Pinky Raspberry Berliner Weisse doubled up – right down to the ABV. That means 250kg of raspberries in 2,000 litres of beer and a beer with a vibrant hue in your glass. When sharing with mates, we flitted between likening it to raspberry sorbet and Creamola Foam, the last of which you'll likely know nothing about as it was a soft drink made from crystals sold mainly in Scotland until production ended at the end of the last millennium (although it does appear to have made a comeback last year). What will make more sense is to say it's pink, fruity, sour yet sweet and sherberty, and has essentially taken the raspberries and the background funk of the original and turned up the dial.