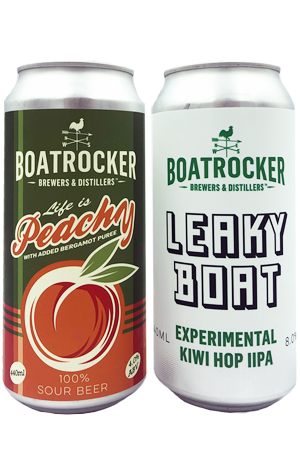 If you're after a reminder as to how fast things have changed (yes, we know you really, really don't) then one of these two limited releases from Boatrocker should do the trick. When coming up with a name and label for their peach and bergamot sour ale, Life Is Peachy worked not only as a punny title but also a summation of life at the Braeside brewery, where they were enjoying record sales and their busiest days at the Barrel Room. Now the beer has arrived, well, let's just say the beer we'll get to below is rather more appropriate...

As for Life Is Peachy the beer, not the sentiment, it's a collaboration with Melbourne pubs The Roston in Richmond and The Park in Abbotsford. And, while it's tagged a sour ale, it's a far cry from the enamel-endangering, palate-quenching blends that regularly leave the brewery's barrel program. Instead, you've got a juicy, peachy, hazy affair in which the bergamot purée is more citrusy dressing than integral part, the tartness gentle, and the overall experience firmly in the realm of easy-drinking.

Then we have Leaky Boat, an apt metaphor for the local beer economy right now. It's an IIPA with "6 months is a long time..." on the side of the cans – a comment on drinking fresh that also feels rather apposite in the current climate. It makes a feature of experimental Kiwi hop HORT4337, one which has been receiving a lot of love for its vibrant, tropical nature. Here, it's not as overtly sweet and fragrant as in other beers I've sampled due to the manner of the beer: it's a tightly wound double IPA reminiscent in structure to last year's DDH IIPA. Clear as anything and with the hops contributing a lean, white wine like aroma and a firm, but not overpowering, piney, earthy bitterness.