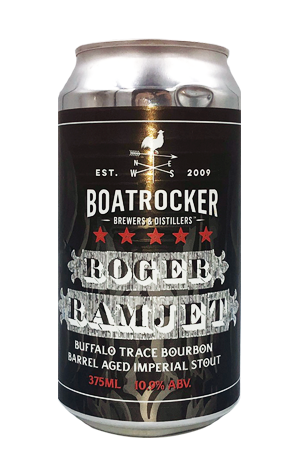 Look, it's not the fanciest or most high brow of words, but it's the one that first came to mind as I tipped my can of Roger Ramjet into a glass (yes, Roger comes in both cans and bottles in 2020, folks). And it's globular. Well, that was the starter for ten, at least. Then there was "sludgy, dense quicksand pit of boozy chocolate dessert through which no light shall pass". But globular is snappier.

Yes, it's fair to say this year's Bourbon Trace barrel-aged addition to the canon of Ramjets is in keeping with its predecessors. If it were a king of England, it would be Henry VIII in all his bloated excess (and, at 10.9 percent ABV, there's a good chance you could lose your head too). Thick fudge, aromas of treacle, hints of something savoury / umami, the sweetness of the bourbon, the creaminess (and a little drying edge) of the oak... Less carbonated than fattened with gelatin (no gelatin is in the beer), it's a wallower for sure.

Decanters By the Bay