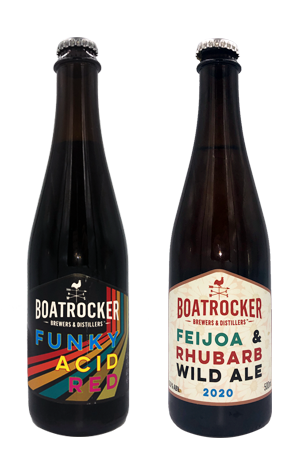 The sour beers came in two by two... At least that seems to be Boatrocker's preferred habit these days. And given the tendency of such beers from a barrel program now seven years old to hit the mark, why the hell not?

Funky Acid Red is another in the brewery's canon of Flanders red style releases and one that reaches the furthest into the depths of their barrels: the liquids here range from 12 months to six years in age so you head in expecting complexity – and that's what you get out. Pouring a cloudy, ruddy hue, you'll unearth lively plum and red berry jam aromas, rum-soaked sponge biscuits, dark fruits, intense, rind-heavy marmalade, deep, sticky, treacle-toffee malts, leather and ingrained oak. For all that, the acid is present from start to finish, like the ringmaster who refuses to cede the centre of the ring but allows everyone else their brief turn in the spotlight.

When it comes to the Feijoa & Rhubarb Wild Ale I have to hold my hands up and admit I've not consumed much of the former; in fact, there's a good chance I've only ever had feijoa in beer. What I can say is this is another Boatrocker wild ale with an intense, prickly, sweet and bracing acidity coming at you with dukes raised. There's an intense kiwifruit character and elements reminiscent of white wine too.

One for fans of potent sours. Or with which to surprise someone who's never had such a beer so you can sit back and wait for their face to contort as soon as sip passes lips.