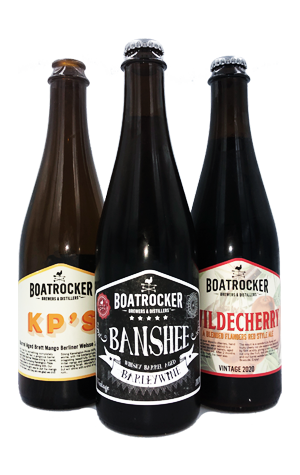 Remember when a new release from a brewery was something of a rarity, when "seasonal release" meant one beer per season? Feels like a long time ago, no, and rather than slowing the rate of new beers COVID-19 has merely proved to be another accelerator pad. That said, Boatrocker have long been in the habit of dropping multiple beers at once and here, with a trio of 500ml bottles that left the brewery around the same time as the two tinnies we wrote about earlier in the week, they show it's a habit they've no intention of kicking.

All three are from their barrel program and display just how diverse said program is. KP's – not named after the industry figure who's played a key role in events such as Good Beer Week but the mangoes – is a combo of barrel-aged Berliner Weisse and a large amount of mango purée. They say "purée" but the liquid that burst from my bottle and clung to my glass was barely distinguishable from roughly hewn mango flesh. Once settled, a genuinely massive mango aroma hits first but it's far leaner and drier than it looks, with an acidity that builds and a rising Brettanomyces-derived, hay like funk. Imagine creating a simple champagne cocktail with mango purée or the manner in which a sommelier might cut through a sweet, textural dish with something acidic and that's effectively what's in the bottle.

Biggest of the trio is the 2020 Banshee release: an English style barleywine aged in freshly-emptied Starward whisky barrels. It reminds me of brandy snaps without the cream or booze-sozzled sultanas, with a young spirit note from the barrels pulling brown sugar and toasted almonds in its wake. It feels like it would benefit from setting down awhile in order to fatten, to allow those rich malts time to become equals with the alcohol and barrel remnants. As things stand, this is one banshee that will send shivers down your spine with each sip.

Fans of Boatrocker will have come across Wildecherry before. It's one of the brewery's Flanders red variants, a blend of liquids of differing ages and sour Morello cherries. Pouring a murky ruddy colour, there's a relatively low carbonation with the acidity put in charge of doing the work on the spritzy textural front. As with other beers of this ilk from Boatrocker, there's plenty to pick at: yeast esters hinting at banana, toffee, aged malt, old oak, sweet acid, marzipan and ripe fruitcake are to be found in the aroma alone. The cherries feature more on palate, where the sweet, quenching acidity hits first before a funky cloud reminds you once again of the beer’s time in barrel. Indeed, this Wildecherry experience is more about the bracing base beer and the bugs within than the fruit addition.