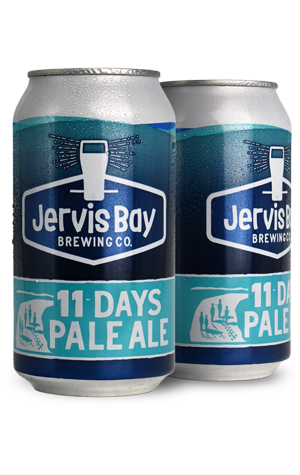 There are plenty of people who've done the responsible thing of walking home after a few beers instead of driving their vehicle. But apparently in 1805, a bunch of sailors wrecked their ship at Jervis Bay and spent the next eleven days walking home to Sydney. Reckon they should’ve just declared Jervis Bay their new home instead.

If they had, their descendants would have eventually been rewarded with 11 Days Pale Ale. They would’ve been hit with bright honeydew melon and peach aromas, and that superfresh note of watermelon rind. When they took a sip and found passionfruit joining the other fruits, as well as a touch of savoury resin, it would’ve made them proud that their ancestors stayed put where they landed. And when the crisp, dry finish had them knocking back a few beers in a row, they would’ve been glad they didn’t have far to walk home.