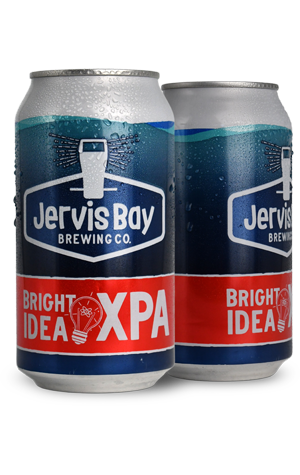 Apparently, Australia almost build a nuclear power plant at Jervis Bay in the 60s. They ditched the proposal in the end (and after half the population of Australia binge-watched Chernobyl in 2019, I don’t think anyone will be in a hurry to revisit that bright idea any time soon). But the people of Jervis Bay haven’t forgotten how close they came.

Bright Idea XPA marries together energetic hops in the nose with grounded malt in the mouth. The whiff of Citra enters with a flourish - sweet tinned pineapple rings (in juice, not syrup, naturally) with a glass of fizzy Fanta on the side.

But the deep gold colour and off-white head tell you the crystal malt refuses to stay hidden here. From the first sip there’s a balance that subdues the hop character; those bright Fanta notes in the aroma become homemade mandarin marmalade, with deep caramelised flavours balancing out the sweetness of the fruit and bitterness of the peel. The back end also brings some forest floor earthiness and a little chewiness, giving more complexity than you might have expected from a single hop XPA.