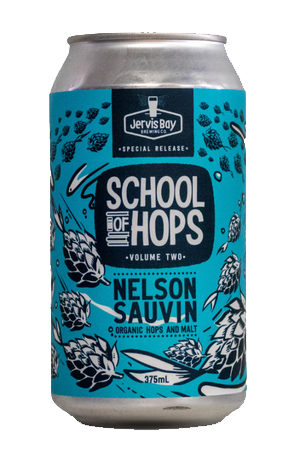 Our man Judd waxed lyrical on the School of Hops theme with the first beer in this series, so I won’t re-tread old ground there.† But here’s the second School of Hops beer: a pale ale with Nelson Sauvin hops and a simple malt bill.

It’s not quite clear, but it’s not hazy either. I probably wouldn’t even call it cloudy. What do you call the level of haze below that? Misty? Fogged-up mirror? Traces of vapour in the air because someone boiled the kettle recently?

While Nelson Sauvin is distinctive, I’ve always found it to be a relatively mild tasting hop, like that friend who’s quirky but doesn’t say much in social situations. In this single hop pale ale, it gets the chance to show off its white grape flavour with a soft sweetness and a tapered fade-out. A flicker of acidity, a hint of earthiness, a sizzle of bitterness, and this easy-drinking beer is over as quickly as it began.

†Am I disappointed that he didn’t find a way to incorporate a Zoolander reference into his ramblings? Slightly. But other than that, he did fine. I guess.