“There seems to be a growing inclination in Australia to mispronounce the name Jervis Bay. May I please assure you that the correct pronunciation of this word is Jervis and not Jarvis.” - Mr Jervis Manton, 1928.

With that out of the way, welcome to Jervis Bay Brewing, the brewery that makes a great place even better.

The Shoalhaven region that Jervis Bay sits within has a blossoming culture of local growers, producers and artisans, so perhaps it shouldn’t be surprising that four strangers could meet and bond over the desire to start a brewery. Ben grew up in the area; Christian, Oisín and Paul were caught in the gravitational pull of this gorgeous part of the world, hailing from as close as the Inner West of Sydney and as far as Northern Ireland. The result of this newfound friendship? A brewery and taproom on the outskirts of the suburb of Huskisson.

It’s a relaxing sanctuary in the middle of an industrial estate. From the moment you arrive, the beer garden greets you like a backyard birthday party: picnic benches shaded by big umbrellas, scattered plants and strings of festoon lights for decoration, and a fire pit for chilly evenings. Between punters sipping at tasting paddles, dogs lazing in the sun, and kids climbing on the play equipment, it’s clear that everyone’s having a good time.

Step inside the airy warehouse and you’ll see that the brick and corrugated iron has been softened with timber, bamboo and hanging ferns, bringing a taste of the natural world into the industrial space.

The bar sits front and centre: first you see the Australian native timber slats; then you see the stained glass picturing the giant cuttlefish that live in the bay; then your eyes land on the ten beer taps emerging from subway tile splashback. It’s here that Jervis Bay Brewing showcases both their regular lineup – from the malty Beacon Lager to the citrusy and sessionable Bright Idea XPA – and their seasonal releases.

With locals and tourists alike churning through plenty of beer, head brewer Oisín Sweeney gets to play with plenty of recipes. Depending on when you’re around, you might get a hazy, red, or black IPA; a hoppy German ale, a Dunkelweizen, or a raspberry wheat beer; a mid-strength mild or a smooth oatmeal stout.

While a certain amount of beer has always made it into cans that's set to ramp up significantly following a major brewery expansion, meaning beer lovers nationally – and in time internationally – will find them appearing in bottleshops near them too. Aided in part by a $600,000 state government grant, they're set to start brewing from a larger system across the road from their brewpub in early 2022.

The new brewhouse will allow them to further enhance their sustainable approach too, via a world-first commercial brewery partnership with SwitcH2, which has developed technology that helps brewers turn wastewater into hydrogen.

It's in keeping with Jervis Bay's ethos around serving the local community they’re a part of, and protecting the natural environment they love so much. At the original brewery, you’ll spy sustainable bamboo, as well as furniture and signs made from reclaimed timber. And, if you look a little closer, you’ll notice the solar panels on the roof, the fundraising for a different charity every month, the sponsoring of local sports teams, and the information nights run for local environmental causes.

This approach grows out of the founders’ love of the local area. The four realised right from the beginning they shared a deeper drive than just wanting to make good beer – they all wanted to give back. After all, three of them started a new life there because they knew how special it was, and Ben, the long term local, decided to never leave. And when the people who live in the area supported the brewery from day one – crucial for a brewery that opened amid bushfires and a pandemic – the four founders knew they’d made the right decision.

To cut a long story short, anyone who lives in the Shoalhaven region already knows about Jervis Bay Brewing; they don’t need to be told twice. But for those who live a few hours away in Sydney, or Canberra, or further afield…

Come for the bay. Stay for the beer.

Jervis Bay Brewing Co opened as bushfires swept the region, closed to the public due to COVID-19 months later, yet are looking forward with optimism after celebrating their first anniversary in the lead up to Christmas. A cliff called Point Perpendicular tells you exactly what to expect from it - it’s straight up and down. That makes it gorgeous to photograph from a distance, perfect for enjoying the panoramic view, and absolutely bonkers to climb. And yet skilled climbers come from all over to have a crack at this impossibly sheer cliff face. I don’t understand some people. Point Perp Pilsner is right at the other end of the spectrum - accessible to all. Jervis Bay Brewing have gone old world meets new world… Read more
Golden Yellow There are plenty of people who've done the responsible thing of walking home after a few beers instead of driving their vehicle. But apparently in 1805, a bunch of sailors wrecked their ship at Jervis Bay and spent the next eleven days walking home to Sydney. Reckon they should’ve just declared Jervis Bay their new home instead. If they had, their descendants would have eventually been rewarded with 11 Days Pale Ale. They would’ve been hit with bright honeydew melon and peach aromas, and that… Read more
Golden Apparently, Australia almost build a nuclear power plant at Jervis Bay in the 60s. They ditched the proposal in the end (and after half the population of Australia binge-watched Chernobyl in 2019, I don’t think anyone will be in a hurry to revisit that bright idea any time soon). But the people of Jervis Bay haven’t forgotten how close they came. Bright Idea XPA marries together energetic hops in the nose with grounded malt in the mouth. The whiff of Citra enters with a flourish - sweet tinned… Read more
Golden Yellow A School of Hops?! I think we can thank our lucky stars that, in this instance at least, Jervis Bay are talking about a series of single hop pale ales, and not an educational facility built entirely out of hop bines. What’s the bloody structural integrity of a skinny little vine with a few flowers hanging about? There’s probably only a handful of building certifiers in this country who are cooked enough to sign off on such a ludicrous venture. Then what? Just teach kids the normal curriculum… Read more
Golden When the days start growing longer and warmer, many Aussie brewers pack away their roasted malts and won’t pull them out again until the following winter. So, if you’re partial to a dark beer, you’ve got to appreciate a brewery that brings out a crisp dark lager in the lead up to summer. While it’s almost black, showing just a glint of maple syrup red around the edges, this beer has the lightness you’re looking for on a hot day. It offers up roast and coffee notes and an earthiness like… Read more
Dark Brown 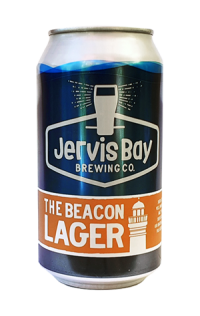 Don’t let the simple word "lager" in the name of this beer stir up expectations of a bright yellow drink. The Beacon isn’t a pale lager but a Vienna lager, shining with malty flavours and vibrant colour. I beseech you to hold it up to the light and bask in its rusty sunset vibe before you even think about tasting this beer – behold it with the slow contemplation of Indiana Jones gazing upon a golden idol (hopefully without the following consequences).† Then, and only then, can you… Read more
Rich Brown Jervis Bay Brewing Co will tell you that this beer was named after the bevy of black swans that gathers at Lake Wollumboola. They’re lying; it’s clear that someone tasted this stout and thought this black bevy deserved to have a collective noun named after it. (Swans were the closest thing to hand at the time.) A session stout that carries the lustre of a bigger beer is a thing of beauty. This one begins by being easy on the eyes, with shiny black plumage and a light brown head. Aromas smooth… Read more
Black 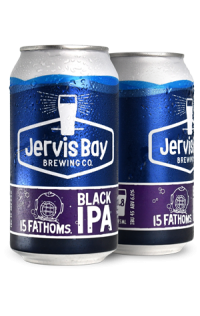 The folk at Jervis Bay Brewing named 15 Fathoms Black IPA after “the deepest darkest depths of Jervis Bay”. This got me wondering about those insane deep sea creatures that look like the real life versions of the monsters from the Pacific Rim movies… before I realised that 15 fathoms is just 27 metres. It’s unlikely that these creatures, which thrive in water over a kilometre deep, are in little ol’ Jervis Bay. But I haven’t checked, so never say never. This beer’s dark body may fit… Read more
Black The name of this beer doesn’t refer to bovines, but to the humpback whales who bring their young into Jervis Bay for a pitstop on their annual migration. They’re playful giants who seem to enjoy putting on a show for anyone watching as they splash and jump around in the water, giving a thrill of joy to those looking on. Perhaps no beer brings quite the same thrill of joy, but Cow & Calf Tropical Pale Ale can at least tap into that same playfulness.† The cocktail of NZ hops used here –… Read more
Golden Yellow