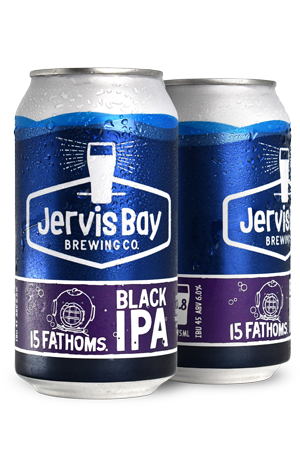 The folk at Jervis Bay Brewing named 15 Fathoms Black IPA after “the deepest darkest depths of Jervis Bay”. This got me wondering about those insane deep sea creatures that look like the real life versions of the monsters from the Pacific Rim movies… before I realised that 15 fathoms is just 27 metres. It’s unlikely that these creatures, which thrive in water over a kilometre deep, are in little ol’ Jervis Bay. But I haven’t checked, so never say never.

This beer’s dark body may fit its dark name, but like the 6-inch vampire squid, it’s not as scary as it sounds. A thick foam and red-tinged edge draw you in to smell its citrus and sarsaparilla notes (and probably get some froth on your nose, if you’re like me). But while it contains Citra, Amarillo and Mandarina Bavaria hops, don’t expect a fruity beast - as soon as you sip you’ll find something more savoury, with roast and nuttiness allowing just a bit of citrus peel bitterness to poke through. It tastes like an American stout, but with a lightness and dryness that has you picking up momentum as you drink.