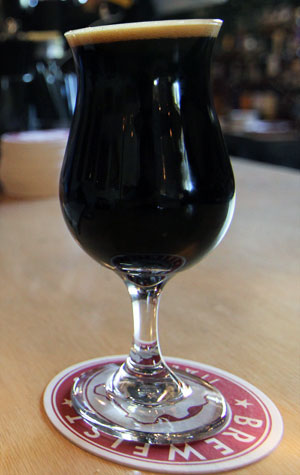 Having helped Melbourne's 3 Ravens to not only its first gold medals at this year's Australian International Beer Awards but also the Best British Ale and Champion Small Brewery titles, head brewer Adrian McNulty decided it was time to take his brewing skills, love of dark music and collection of off kilter headwear to pastures new in the form of Moon Dog. Prior to leaving, he created a farewell beer with his recently installed co-brewer, Ian Morgan (who has since been joined by former Boneyard brewer Brendan O'Sullivan). The beer is the Unkindness, the name conjured during an idle moment at work spent Googling the name for a group of ravens, and is the latest to feature Hop Products Australia's latest poster girl, the Enigma hop. The style is a black IPA (or India Black Ale or Cascadian Dark Ale) that features hop additions at every turn ' mash, first wort, boil up, whirlpool, hopback, and dry hopping. The result is a beer that is indeed deeply black and ravenesque and which, despite a theoretical 130 IBU (bittering units for those scratching their heads, of which the normal human palate is unable to distinguish much over 100), is not as overwhelmingly hoppy as one might have expected. Instead the fruitier side of the aroma (with a side helping of mint, according to the brewers) sits alongside some chocolate from the Midnight wheat malt used to attain the colour and the finish is rather smooth instead of palate-strippingly bitter. All of which is good for the drinker, even if it's not particularly unkind. What's unkind is that there are only four kegs in existence.