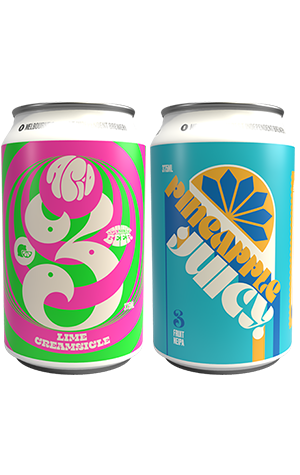 For many on the east coast of Australia, there’s going to be a lot of making up for lost time over summer. The simple pleasure of picnics is already a key part of many weekends and welcoming the warmer weather are 3 Ravens with their returning Summer of Creamsicle.

Similar to the first iteration, from September 2021 to January 2022 they’ll be releasing three new Creamsicle flavours, all based on their Acid sour ale and all focused on nostalgic flavours. There's also a range of prizes that can be won throughout the season and first up is Lime Creamsicle, in which rolled wheat and lactose provide extra creaminess to the base sour. There’s also vanilla and French oak chips added to aid the beer’s vanilla ice cream-inducing backdrop but, by and large, it's the zesty lime that leads the charge, making the beer rather close to a Splice Pine Lime without featuring one of those fruits.

But if you're seeking out that other part of a Splice (or maybe keen to mix your beers), you'll want to hunt down Pineapple Juicy. Here, the Melbourne brewery have sought to showcase some of the biggest “pineapply” hops on the market, along with actual local pineapple juice. It includes a mix of Chinook, El Dorado, Azacca and the Australian heavy-hitters of Galaxy and Vic Secret; their combination in this Juicy sees basically every type of the fruit make its way into the beer. There’s ultra-ripe fresh fruit, candied pineapple plus some tropical juice that brings with it a level of tartness set against the beer’s smooth, fluffy texture.

If you’re seeking another kind of nostalgia, 3 Ravens have also rebrewed their classic 55 Pale Ale, first created for their fifth birthday in 2008. Featuring five hops and five malts, it's heavy on the crystal flavours and biting bitterness.